Say Hello To The Frog In Your Life


Frog Luck - Bringing Changes and Abundance to Life
When creating one of my programmes "Time to move ahead" I needed a photo to illustrate time and what better than a clock. I soon found one on Fotolia and bought it - a lovely clear picture with a cute frog in the top right. I used this thinking it was a bit of fun but was completely unaware that in many cultures frogs are lucky which I found out from a colleague who had an interest in American Native Indians. 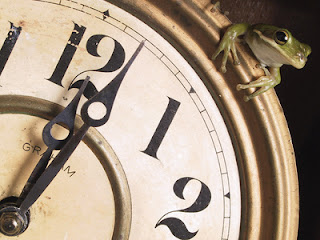 A bit of research and I came across an article by Clarice of Animal World; Frog Luck, Bringing Changes and Abundance to Life

This is taken from that article and it just amazing how many cultures value the humble frog.
1. Good Luck
In Japan frogs are a symbol of Good Luck, and the Romans believed that to have a frog would bring good luck into the home. The Irish on the other hand, consider the frog as a close relative of the leprechaun, and thus very capable of playing tricks on you.
2. Fertility
The Greeks and Romans both associated frogs with fertility and harmony. To the Egyptians the frog is a symbol of life and fertility, as well as rebirth or resurrection. The frog was a creature born of the annual flooding of the Nile, which in turn made the otherwise barren lands fertile. Thus the frog-goddess of Fertility named Heget (meaning frog), came into their culture and mythology. In the Roman culture, the goddess Venus was also often depicted with a frog.
3. Abundance
Partly due to the very large number of eggs that a frog will lay, it became a symbol of abundance as well. For many cultures that depend on rain for rich and bountiful crops the frog is a good luck symbol, a sign of prosperous weather to come. In Native American tradition the frog is often seen as a rain maker. In Australia too, the native Aborigines believed frogs brought the thunder and rain to help plants to grow. To the Vietnamese the toad is the “uncle of the Sky”, and an ancient story tells that it will rain whenever toads grind their teeth.
4. Wealth
In ancient China the frog represented the lunar yin and the Frog spirit Ch’ing-Wa Sheng was associated with healing and good fortune in business. Tradition has it that the Chinese god of wealth, the immortal Liu Hai, kept a three-legged toad as a pet. It is a symbol for riches and often pictured with a gold coin in its mouth.
5. Health
In Native American culture, the frog is seen as a spirit animal or totem that is strongly associated with the water element and its cleansing attributes. This water connection brings emotions and feminine energies, but also cleanses physically, emotionally, and spiritually.
6. Friendship
In folklore the first frog of spring is said to bring you many friends if it does a “hop toad” jump in your direction.
I'm off to find my lucky frog and if you want to change your life hop over to  www.mejma.com and search for the frog on clock.